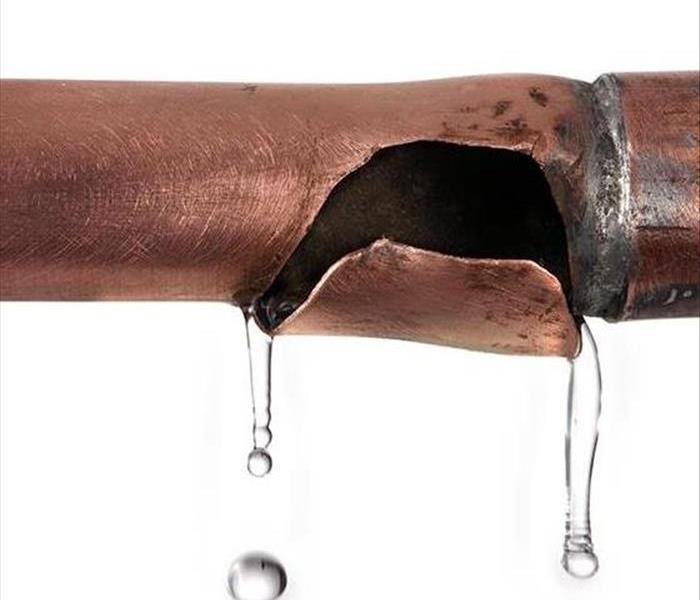 Homes that suffer a broken pipe or a disconnection between joints can be flooded with gallons of water in a very short period.

Many people believe that burst pipes are a problem only during the winter, and in locations much farther north. Freezing conditions are only half of the climate-related conditions that can lead to this problem.

In Dallas, flood damage can happen in various ways. One of these ways is very unexpected but simple to understand. As summer sunshine increases, the soil around your home greatly increases in temperature. This might not seem like it would create a problem inside your home, but it happens often.

Pipes on the exterior of your home supply water to the interior. When these metal pipes are heated by the sun, that water inside them heats and expands. In addition to this, the soil around your home in which these feeder lines are buried can create pressure on the pipes. This is especially true when there has been little or no recent rainfall. Combining the increased external pressure with the increased internal pressure, and the water inside the pipes in your home's interior can become high enough to break a pipe.

There are many other reasons why pipes can break in the summer, and many of these reasons are never discovered, remaining mysteries. Rarely is the piping itself defective. Many pipes come loose from a coupling instead of shattering when internal pressure builds up to destructive levels.

Homes that suffer a broken pipe or a disconnection between joints can be flooded with gallons of water in a very short period. The location of the break can happen anywhere there are water pipes, including inside of walls and ceilings. This can damage not only your belongings but also the very structure of your home. This is why SERVPRO has technicians who are trained in knowing how water acts – both as it is streaming from a now-open pipe, and after, as it spreads through your home.

When SERVPRO faces this type of situation, we understand that flood damage will become worse as time passes. Each minute can allow damage costs to increase. The risk of future damage also increases with time. Because flood damage from a broken pipe is inside your home, contamination is more controlled. However, this does not by any means signify that contamination should not be considered. Electrical shorts and other hazards also need to be realized as possibilities, even after the home is only at a damp level and there is no standing water present.

SERVPRO of Southeast Dallas County understands the risks that come with flood damage from broken pipes. We can make it “Like it never even happened.” Just call us at (972) 227-0800, no matter the time or day – we always remain available and ready to assist you and your family.